The group's scientific expertise is rooted in mechanics. The group was originally founded by John Rasmussen and Michael Damsgaard following loose ideas thrown around in a coffee break. John was working with structural optimization at the time, and Michael had just finished his Ph.D. on development of a multibody simulation system by object-oriented programming, and together they had supervised three consecutive groups of students working on optimization of bicycle frames. One of the frame designs from 1993 is still on display in the lab. 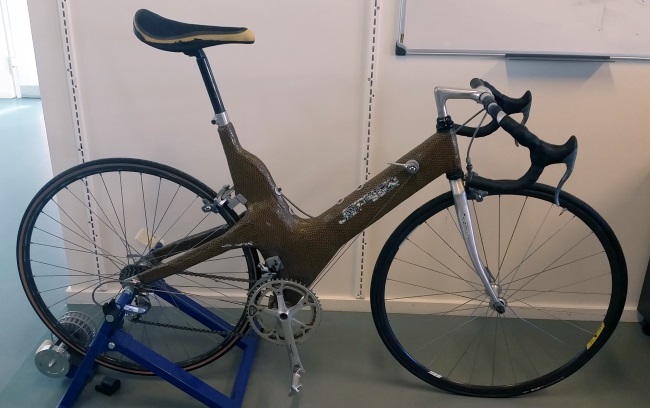 The principles behind structural optimization like this is to distribute the load evenly over the structure according to the varying strength of its different elements. This was done by finite element anaysis, which in the early nineties was a very time-consuming task to perform on a computer, so it called for very efficient algorithms. It turned out that the same algorithms, when combined with the multibody dynamics modeling that Michael was working on, could resolve the muscle redundancy problem and predict how the rider would organize muscle actions to propel the bicycle.

Musculoskeletal modeling has since been the backbone of the group's research. The work described above became the AnyBody Modeling System, which was subsequently spun out into a priviate company, AnyBody Technology, where Michael Damsgaard is still heading the development of the technology. Hundreds of papers by independent research groups from all over the world are based on the use of AnyBody and, in 2014, an international group of scientists headed by Michael Skipper Andersen won the Grand Challenge Competition to Predict In Vivo Knee Loads using AnyBody as their simulation tool.

The group also maintains research activities based on solid mechanics. In cooperation with Aalborg University's Laboratory for Stem Cell Research, the group investigates mechanical stimulation of cell differentiation and proliferation with implications for the understanding of pressure ulcers and engineering of new tisssue.

All of the aforementioned fields have applications in sports science. A high number of talented students in Sports Technology has sparked a research interest into many different fields of sports science with an emphasis on engineering-oriented fields, such as ergonomically optimal setups for grinding on large sail boats, the design of tissue-friendly bycycle saddles and development of better badminton rackets and tennis racket strings.